This was our first view of the site from the lower road.

This section is a blog which records the development of the Hermitage as it unfolded.

We are still  developing the Land which will become the site of the Hermitage. Right now it is roughly 15 acres of treed land that has been left dormant for about the last 20 years. While we have cleared a driveway and main house site since I first added this page, the land still need much tending and clearing to make it accessible to retreatants. 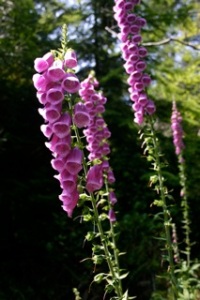 In spring, foxgloves of purple, pink, and white, fill the sunlit areas of the forest.

When we first walked through the land, we were impressed by the abundance of life, old and new, that surrounded us. The longer I walked the land the more I noticed: Alder, Hemlock, and new grasses were naturally restoring old but still walkable, logging paths. These were the most accessible places and so the first discovered. Living things filled the forest: Wrens, Towhees, Finches, Robins, Pileated Woodpeckers and their smaller Sapsucker relatives, are just some of the many birds we heard or saw. Deer had made their beds under large old trees for many years while other smaller and more fragile creatures, such as insects, frogs, and salamanders had laid their eggs near the creek and on old, decaying logs. And all around the silence was deep and still and inward. As we went increasingly into the thicker, untouched areas the rocky landscape was covered abundantly with huge Douglas Firs and tall Cedar trees; wild flowers and ferns of various kinds created a nearly impassable yet beautiful undergrowth.

Fallen trees and dense undergrowth make it difficult to walk through many places on the land and invite us to create gentle, meandering paths.

Tall trees reach high over our heads as we look up at the canopied sky.

The Big Picture:
The Hermitage land is shaped roughly like a south pointing triangle, bordered along one side by the year-round Josephine Creek, a gently used road on another, and designated parkland along the bottom.

Proposed Site Layout: can be found on the Main House page.

Making Paths and Preparing the Way

Trailblazing is our main adventure when it comes to developing the land. Thankfully we have been blessed so far with two teams of terrific, hard-working volunteers who have come and prepared paths, stacked firewood, or begun clearing building sites. There is still much to do and we hope to continue welcoming volunteer teams to participate with us in making the land accessible. *click on the pictures below to enlarge

Jenna and Kayla from WCCS making a path through thick ferns

Thank-you to the WCCS students who worked hard to tend a 400 year old Pacific Yew and make paths for others to enjoy it.

On May 14, a group of 12 high school students from West Coast Christian School came as volunteers to clear paths and tend a 400 year old Yew tree that we found on the land. Everyone had lots of fun and accomplished more in one day than I could have asked or imagined! Thanks to their hard work, everyone who comes to the Hermitage land is able to walk easily from the entrance to the main building site and from there to the site of the Yew tree; a walking trail of about 800 meters!

A team of Pearson College students volunteered for a day to clear the land in preparation for path building and sleeping shelter sites.

They moved trees, brush, and piled up plenty of firewood!

Thanks Pearson College students for the hard work you gave to prepare the land for paths and sleeping shelter sites!

Today we had a group of UGM guys out to the Hermitage. They brought along their chain saw and bucked up a few of the fallen trees that were far too large to move. They unveiled some hidden paths beneath those trees and opened up the beauty of the landscape at the front of the Main House. Thanks for your hard work!